Yesterday was a good Saturday…a little hectic, but still good.  I was planning on going on a hike with my friends Stefanie + Stephanie, but I decided we could use some extra $$$ so I went and worked at my company’s booth at SIA again. Beforehand I cleaned, picked up poop in the backyard (blech!!), did laundry, and worked out (I did a full-body circuit training workout that I recorded off of Fit TV).  Afterwards I sat down to figure out what to do about lunch, and all I could think about was mac ‘n’ cheese!  Soooo, I figured I might as well go for it so I didn’t eat everything else in sight because all I really wanted was this:

It’s a super easy recipe…I had to use spaghetti because it was the only noodle of any kind that we had!  Still tasted yummy to me 🙂  Here’s the recipe:

Preheat broiler on oven if topping with shredded cheese.  Cook the noodles according to package directions, drain.  I took mine out a little before completely done since I was going to broil with cheese in the oven.  In a saucepan, melt butter and stir in flour.  Stir constantly to create a roux for about 1 minute.  Whisk in milk and, stirring constantly, let thicken for about 1 minute.  Stir in velveeta.  Stirring constantly, let it melt thoroughly.  Add seasonings, stir.  Add drained pasta and coat thoroughly with cheese sauce.  If you’re wanting broiled cheese, pour into an oven-safe pan, top with shredded cheese, and broil for about 1-2 minutes, or until cheese on top is bubbly and brown.  DEVOUR.

I had about a cup of this, and put the rest away so I wouldn’t eat it all.  Because I totally would.  Don’t test me!

When Nate got home from skiing, he hopped in the shower and we headed downtown to the convention center.  On the way I finally got around to eating my Kind bar that I bought on Thursday!

It was yummy, and I was pleasantly surprised that it had macadamia nuts in it!  SOOOOOO good, I love those things!

After the show was over for the day, we walked across the street to Rock Bottom for dinner.  We all split some edamame:

I decided as soon as we got there on the Turkey Chimichurri Burger with fruit on the side instead of fries:

This was really good!  The turkey burger was perfectly done, and the pickle de gallo on top was a cool addition!  I didn’t see any chimichurri sauce on it though, til the middle.  That was the only disappointing part. 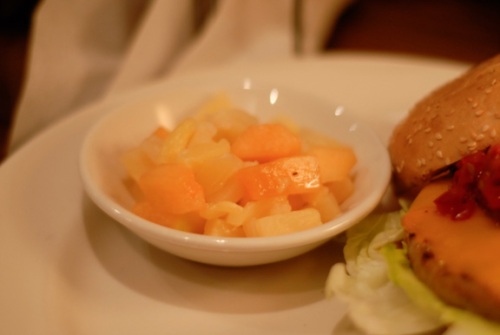 Nate got a steak with parmesan fries and squash:

His was pretty good…the fries were great (obvi, they’re FRIED), the veggies were good, but the steak (albeit perfectly cooked for my taste) didn’t really have a lot of flavor.  Maybe it was just my bite, but all I tasted was char.  He liked it though, and that’s what really matters!

We got home and crashed like the old people we are!  We were watching the X-Games on ESPN, and the next thing I know Nate’s waking me up and telling me to go to bed.  Oops!

Breakfast this morning was another breakfast cookie (recipe in the recipes section!!!) on a little tiny plate because I was trying to be fancy and use a different kind of plate: 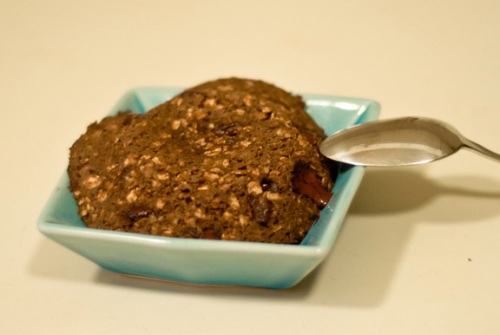 ‘Twas a little small…but still tasted delish!  This was my last packet of Chocolate Amazing Grass.  Probably a good thing because I need to do some sort of breakfast variety or else you guys will quit reading!  Can’t have that 🙂

In regards to the title of this post, yesterday we walked around the convention center to check out other booths.  There was rumor that Skullcandy was giving out free headphones!  Nate and Jonathan and I walked over to check it out, but I immediately felt completely uncomfortable because there were scantily clad ladies standing around dancing (they worked for the booth) and apparently the only way to get free headphones was to dance for them.  Couple things here:  1) I’m not much of a dancer, 2) I don’t really care if I get free headphones, and 3) most importantly, I really detest how women are exploited in the whole “Sex Sells” advertising theme in America.  I’m not some performing monkey who’ll perform for free stuff; I think I’m better than that!  I took some stickers and walked away awkwardly.

How do you guys feel about this?  Would you have brushed it off and danced for the headphones?  How do you feel about trade shows (and other entities) hiring beautiful women to wear next to nothing to come into their booth? I’ve gotta say, I was really proud of my company at this point because we had fit models, but they were all wearing ski pants and jackets and were completely clothed, and I thought they were the prettiest ones there!

Shout out to all the parents just trying to make t

Goal for this weekend: get my sleep score waaaaaaa

Out with the old, in with the new! Who cares if it

Y’all KNOW I’m no fashion blogger (hello, as I

This week I’ve been working on intentionally unp

Top 3️⃣ products coming at you! Most of my Bea

PRO TIP COMING AT YOU! But first the real real: t

I love Monday’s y’all! The feeling of startin