Hello hello!  How’s the weekend treating y’all?  I know for me it’s just been way too short!

We started our Saturday by eating breakfast in Downtown Denver at Dixons Downtown Grill:

We always complain about how we never go into Denver enough and therefore aren’t very familiar with it at all, so we were pretty excited to be there for breakfast.  Everything started out well with a cup of coffee: 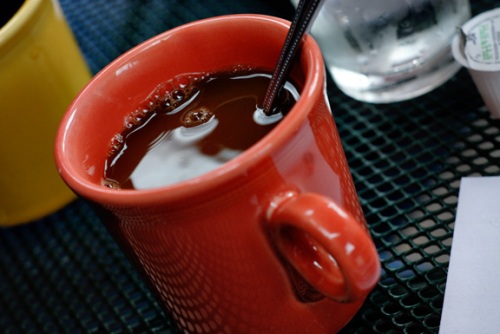 And lots of water:

And from there on we had a horrible experience.  Our waitress was pretty short (verbally, not stature) from the beginning, and we ran out of water and coffee for about 15 minutes as we watched her serve every other table several times, not once stopping to check on us.  Then the table behind us ordered and got their food within 5 minutes of them ordering while we had yet to see ours at all (AND they ordered the same thing as us).  THEN I finally stopped the waitress and asked if we’d be getting our food anytime soon, to which she responded with a horrible fake smile and a ton of sarcasm.  Apparently they were busy inside the restaurant, and then she walked away so quickly that I couldn’t point out the other table received their food in a timely manner.  Fast forward 20 minutes…we get our food, only to find out that she wrote down something completely different for Nate than what he actually ordered.  When we told her this, she argued and said that she knew he ordered what was put in front of him…seriously, as someone in the service industry, it’s just a plate of food…don’t argue with the customer about it!  He decided to go ahead and eat it, but I can honestly say that if it had been my food, I would have sent it back and found a manager immediately.  All of this is a shame because I will never recommend Dixon’s, even though the food was good.  I had the Greek scramble, which was feta, olives, tomatoes, and basil scrambled in eggs with hashbrowns and a biscuit:

The waitress ended up comping Nate’s meal, but I was (and still am) just furious at the treatment we received.  I’m planning on writing an email to Dixon’s today about it.

The rest of our time in Denver was spent at pro photo stores inquiring about lighting rentals for some upcoming portraits and stocking up on bulk items at CostCo.  When we got home I started working on pulling weeds, which required a lot of heavy lifting to get them out by the roots.  I also repaired some of the landscaping that I messed up last year, which was crazy hard!  Then, since we knew we were having Robbie & Stef over for movie night, I spent some quality cleaning time inside (but made sure to listen to Mamma Mia! radio on Pandora :)).

A couple weeks ago, NuNaturals contacted me about sampling some of their Stevia products, an opportunity that I just JUMPED at!  They also sent me a TON of stuff, which I haven’t really been able to use until just recently:

I’ve been using the packets in my green monsters and coffee for a while though and have been extremely impressed.  Yesterday I decided to make Julie’s Flourless Peanut Butter Cookies, but I decided to pull out the NuNaturals baking blend for them.  I also added about 1/2 cup of toffee bits:

I have to say I’m even more impressed with NuNaturals after that little baking experiment…the cookies were still ooey, gooey, and soft.  The flavor was spot-on, and we didn’t feel bad about eating them!  I would highly recommend checking out their website for even more fabulous products!  The movie du jour was Avatar:

And now I’m stuck wondering why I’m not a Navi or at least an Avatar.  I LOVED this movie and was so glad we finally got to see it!  We also made a recipe from The Pioneer Woman Cooks:  BBQ Jalapeno Poppers!

Drool. DROOLDROOLDROOLDROOL.  These were so amazing, and Ree’s right when she says you should make 3 times the amount you think you need!  There were only 4 of us, but we blew through these things like they were nothing.  You should go make them.  Like, yesterday. 🙂

So, how’s your weekend been?  Have you ever had a bad restaurant experience like the one I talked about above? I have to say, I’ve been a busy waitress before, so I know what it feels like to be overwhelmed, but I can also honestly say that I’ve never let someone else’s experience go sour because of my attitude either.  Luckily this is the only bad restaurant experience I can think of!  I normally email companies to praise the service I’ve received, and this is a first that I’m not excited about.  I think Nate put it perfectly when he said we would go back, but under no circumstances would we want that same server!

My allergies may be making me want to scratch my e