I’m so glad that everyone has weird little quirks about silly things too!  I’m telling you:  sun-bleached arm hair is the way to go!

WARNING:  SOAPBOX ALERT!!! Last night I took the dogs to the dog park after work so that they could run their little hearts out!  We were having a blast until some guy brought his huge (and very old) husky in to the water area to play.  The dog started fights with 2 other dogs, and then went after Bunker, who yelped loader than I’ve ever heard him yelp in 3 years, and who swam to the middle of the pond to get away.  I was so angry…not with the older dog, but the fact that the dog’s owner was hardly doing anything to stop it!  I called him out and said that his dog was posing a danger to everyone else, and he finally got it on a leash and took it into a more wide-open area (which is where it felt more comfortable and frolicked around happily til after we left).  When we got home and I was bathing Bunker, I found that the dog had put a gash in the top of his head!  He’s OK, but just so you know:  if your dog is instigating a very uncomfortable situation around other people or animals, it’s best for everyone to take it somewhere else where it can calm down and be the sweet, loving pet you know it to be.  There, I’m off my soapbox!

Dinner last night was herb-crusted tilapia and toasty parmesan ravioli!  Super easy and super delicious.  The ravioli was frozen, so I pulled out 4 (one serving) and boiled them for 3 minutes.  I took them out, dried them a little with a paper towel, then placed them on a baking sheet coated with non-stick spray.  Sprinkle with grated parmesan (make sure you push the parm down a little with your fingertips), then give the cheese a light dusting of non-stick spray.  Broil for 3-4 minutes, or until golden and bubbly on top.  Serve hot with marinara, or just eat them by themselves! 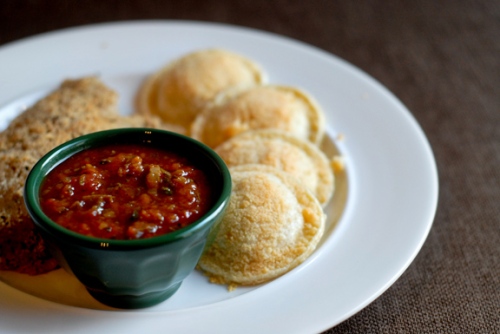 The tilapia was incredibly easy too!  I used 2 tilapia filets and took about 1 cup of whole wheat breadcrumbs mixed with:

I seasoned both sides of the tilapia with Old Bay seasoning, and then pressed 1/2 a cup of the breadcrumb mixture ON ONE SIDE of the tilapia.  Bake at 400 for 15 minutes.  Let cool for 2 minutes on pan, and then transfer to serving plate.  Serve hot and enjoy! 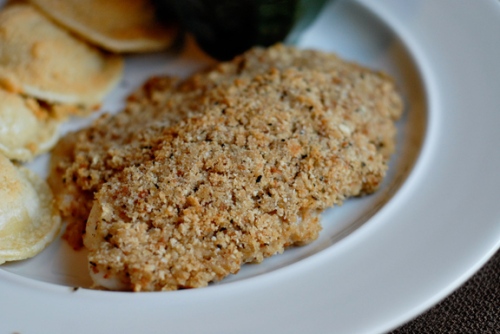 I know our dinner was lacking in the veggie department, but we DID use a marinara sauce (about 1/2 cup each) with tons of shredded carrots, zucchini, mushrooms, onions, and celery.  It was exactly what I wanted to eat though, so therefore it was perfect 🙂

This morning I got up to do a pilates video I forgot I had…and was quickly reminded WHY I tried to forget about it.  It was boring with hardly any instruction, and to top that off:  I just don’t like pilates.  It’s a little too dance-y, and the moves are extremely unnatural for me because of that.  I decided to do Whittle My Middle II while the video was playing in the background, then got ready for work.  Breakfast this morning was an attempt at a new Green Monster obsession:  Peach Pie Green Monster! 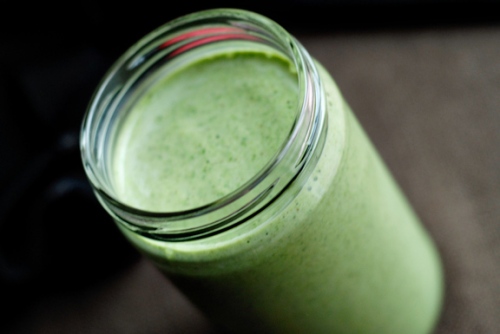 This one’s TOTALLY green!  It was just OK…not enough peach flavor in my opinion…but I’ll still share it with y’all in case you want to try it 🙂

Blend until smooth and enjoy!  I definitely enjoyed this one, but next time will probably try to use a really fresh, ripe, in-season peach to get more flavah 🙂

I have to say, I was pretty hesitant to admit that I don’t like pilates on here this morning.  I know that there are many MANY benefits to doing that form of exercise, but I don’t feel like I should do anything I don’t have fun with…otherwise I know I’ll just stop and find something else to do.  What forms of exercise do you really LOVE to do?  And consequently, which forms of exercise do you really HATE to do? I really enjoy walking, hiking, running (when I can), biking, swimming, formal strength training, and yoga.  I do NOT like pilates or any sort of dance class (although I have to admit I do want to try Zumba), mainly because I just don’t really enjoy dancing all that much (yes, I’m weird).  But I AM thankful to have found things I really like to do!