Yes, that was cheesy.  What can you do?  Sometimes I just can’t think of a face-rocking post title 🙂

I had a little bit of my 77% Cocoa Chocolove bar this afternoon:

See my fingerprints in there?  I love this chocolate so much…it has a great sort of tang at the end, which I adore!

This afternoon I took a 40 minute walk with about 10 minutes worth of walking lunges in the middle.  I hurt now.  OUCH 🙂  (the good kind)

Tonight for dinner we had mustard-glazed chicken breasts, quinoa, and zucchini latkes!  I totally was winging it on the recipes tonight, but I think it all turned out really great!  We’ll start with the zucchini latkes recipe:

I shredded my veggies in my food processor, but you could totally do it with a box grater if you don’t have an automatic shredder.  Once everything’s shredded, set it in a colander to drain.  You want these to be as dry as possible so they brown properly.  Next, whisk together the egg whites, grated garlic, salt, pepper, flour, and cheese.  After the veggies have drained, mix it all together.  In a non-stick skillet, heat 1 Tbsp oil (I used veggie oil) over medium high heat.  Drop the “batter” by the spoonful in the hot oil.  Brown for 3-5 minutes on each side!  Drain them on a paper towel when they’re done and make sure you serve them hot 🙂

And the finished product:

These turned out really well, and they were pan-fried with relatively little fat!

Next was the chicken.  Now, I told Nate to do some sort of glaze/marinade with mustard and brown sugar, and he basically took it from there.  Here’s the mix:

He poured it over the chicken and let it sit for about 10 minutes before firing up the grill.  Grill about 5 minutes on each side, then put it on a plate and cover with foil for another 10 minutes.  The foil traps in the heat from the chicken and increases the amount of carryover cooking.  It also keeps the juices in the chicken, so you come out with a really juicy, tender chicken breast! 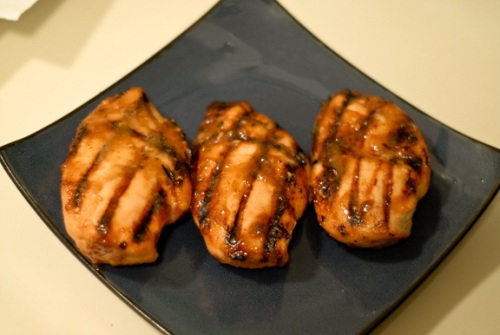 These were so SO SOOO good!  I really wanted to eat the last one, but I didn’t.  Definitely a keeper!

Finally, we tried our hand at quinoa again.  I’ll admit, I was pretty scared, but it turned out really good!  Basically I just followed the package instructions for cooking it and added a little lemon juice to the water.  After it was done cooking I threw in about 2 tsp of Mrs. Dash Original and some salt + pepper.  I put a little too much salt in, but I really loved the texture!  I think I might be able to love quinoa 🙂

And we ended the meal with some chocolate chips: 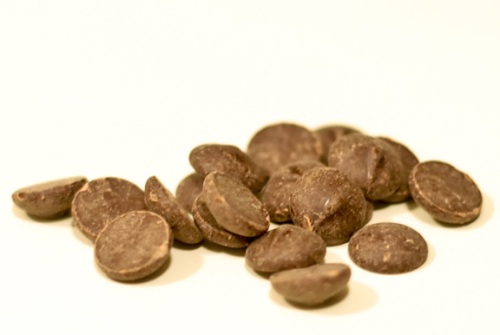 I know I said it before, but I am SO excited that I liked the quinoa.  There are so many great benefits to it, and I know that it’s super versatile too.  Here’s what I was able to find on the WF website about quinoa:

“A recently rediscovered ancient “grain” native to South America, quinoa was once called “the gold of the Incas,” who recognized its value in increasing the stamina of their warriors. Not only is quinoa high in protein, but the protein it supplies is complete protein, meaning that it includes all nine essential amino acids. Not only is quinoa’s amino acid profile well balanced, making it a good choice for vegans concerned about adequate protein intake, but quinoa is especially well-endowed with the amino acid lysine, which is essential for tissue growth and repair. In addition to protein, quinoa features a host of other health-building nutrients. Because quinoa is a very good source of manganese as well as a good source of magnesium, iron, copper and phosphorus, this “grain” may be especially valuable for persons with migraine headaches, diabetes and atherosclerosis.”

I mean, it sounds like a really great thing, right?  A grain with great protein properties?  I’ll take it 🙂

Anyone have any really good, FLAVORFUL quinoa recipes you’d like to share?  Feel free to link back to your blog if you’ve come up with a studly one yourself 🙂

For my @fasterwaytofatloss friends, here’s an AM

A little #howitstartedvshowitsgoing situation with

Why am I looking away? Simple: because it was the

🏃🏼‍♀️Who else is struggling with findi

So. It’s been a while since I posted on the feed