Marnin’ 🙂  Can y’all believe it’s Thursday already?  I think this week has flown by more than most!  I’m so excited to share this simple recipe for pan fried tilapia fillets, but first let’s look at the rest of the day’s eats 🙂

Yesterday morning I returned to my newest obsession, oatmeal pancakes:

I know, I know…you’re probably in love 🙂  I didn’t have any mashed banana to layer between the pancakes though, so naturally (as I was digging around through the fridge for a suitable replacement) I used the leftover cream cheese icing from my cupcakes last week!  Talk about decadent…holy WOW!  I only used 1/2 a tablespoon, but even then I felt that it was almost too sweet.  Keyword:  almost. I had another fabulous Nate latte creation at work: 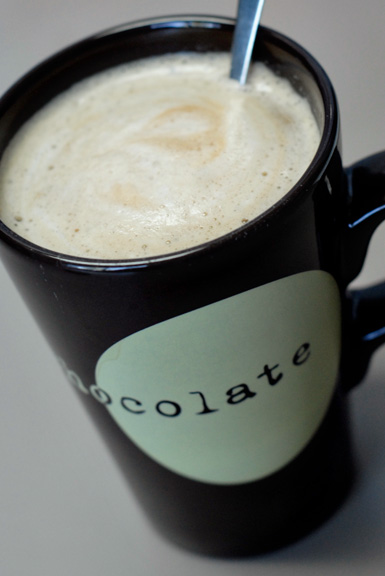 And lunch was similar to yesterday, but I used less meat and more peppers and carrots mixed with homemade bbq sauce:

With a bun on the side.  I only at half of the bun though, because that’s when I realized it was molding…GROSS!

I’m happy to report that my walk yesterday went REALLY well!  I was even able to go a little faster and there was zero pain in my knee 🙂  I have my fingers crossed that it’s getting better and better, slowly but surely, and that I will be up hiking in no time 🙂  Dinner was a little fly-by-the-seat-of-my-pants-esque last night; we had Simple Pan-Fried Tilapia, Roasted Broccoli, and Toasted Ravioli, all served with some marinara on the side:

The ravioli are super easy…just take some frozen stuffed ravioli, cook according to package directions, then remove from water.  Top with a little parmesan on each one, then broil for 3-5 minutes until golden brown and toasty 🙂

In one bowl put the breadcrumbs, then in the second put the flour, and in the third put the egg.  Towel dry the tilapia with a paper towel.  Coat each filet with flour, then egg, then flour, then egg, then the breadcrumbs.  Repeat for all filets.  In a medium pan over medium-low heat, heat the tsp of oil.  Swirl it around the pan.  Add the coated filets and cook until done in the center, about 5 minutes on each side.  Serve hot! 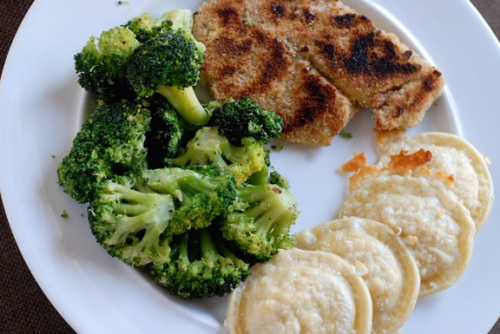 I have to admit to you guys…I’ve been feeling a little down this week.  I haven’t been working out nearly as much (read:  I’m not taking the time to workout the way I want to) and that fact has been taking it’s toll on me.  I also haven’t been eating smaller portions or healthier foods like I should to counterbalance the lack of exercise.  I’m not talking about restricting, but I do have to be honest with myself:  if I’m not working out as hard, my body doesn’t need as much food to fuel it.  I’ve basically been struggling with how to tell myself “no” and then actually LISTENING when I do say no.  I know that this will pass, and just like I mentioned in yesterday’s Joyful Kitchen post, one or two meals aren’t going to cause me to get fat.  I just have some weight loss goals that I would like to achieve by September and November, and the lifestyle I’ve been leading this past week is NOT conducive to reaching those.

How do you “get back on track” again when you stray into eating a little more unhealthy stuff more consistently? Also, how do you fit exercise into your day? I struggle with not having a gym with a set time to go workout, so I’m stuck with just fitting those workouts in where I can.  That works most of the time, but I’m definitely a planner and like to know what to expect more often than not!