Well, I feel kind of silly now talking about how crazy the snow was last night, seeing as how it’s gorgeous and sunny and now all of the streets are dry.  Make no mistake, it was BAD yesterday, but now it’s like it never even happened!  C’est la vie!

Breakfast this morning was a bit out of the box: 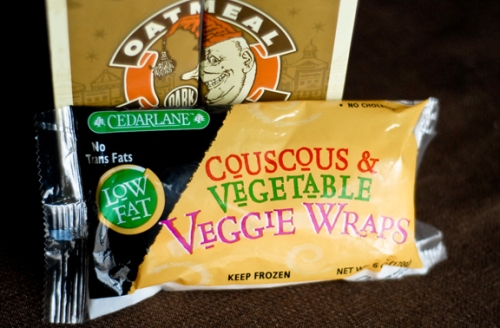 NO I did not have Oatmeal Stout for breakfast.  I believe that’s called alcoholism.  No, no, I had the Couscous Veggie Wrap.  I wasn’t really sure what I was going to think about this…I mean, couscous in a burrito?  It was great!  I really enjoyed the texture, and the black olives inside were a nice touch!  The tortilla part got kind of crumbly after a bit, but the flavor was still spot-on.  Way to go Cedarlane!

When we got to work I found that one of the girls in the department brought peanut butter chocolate chip cookies! 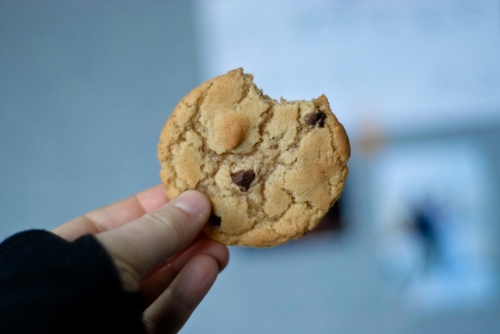 I wonder if ever a better combination could exist?  I think not!  They were really good – crisp on the outside and chewy on the inside.  YUM!  Since we’re in the middle of the slower season at work now the boredom can be almost mind-numbing at times.  This is where peel-and-eat fruit is a good idea.  I had 2 clementines as a little snacker:

Then I just gave in and made lunch:

A sandwich thin with a MorningStar veggie patty, cheddar cheese, and a big handful of carrots with the following peanut butter:

SO.  About this peanut butter.  I didn’t expect a slew of separated oil to slop all over my hands when I opened it; however, that’s exactly what happened.  I don’t know about y’all, but I hate getting oil on my hands with a passion.  I couldn’t get to the bathroom fast enough to wash it off!  PLUS it wasn’t really that great with carrots – almond butter is MUCH better!  I only had a couple of carrots with this on them and then just ate them plain.  Ashley told me (via Twitter) the organic peanut butter at Whole Foods aren’t oily at all, which makes me happy.  I now have a jar of the oily stuff I need to figure out something for, but I know where I’m getting my next jar!

About halfway through the afternoon I decided HEY!  I sure could use some dessert…enter the heavenly Chocolate Crisp Attune Bar: 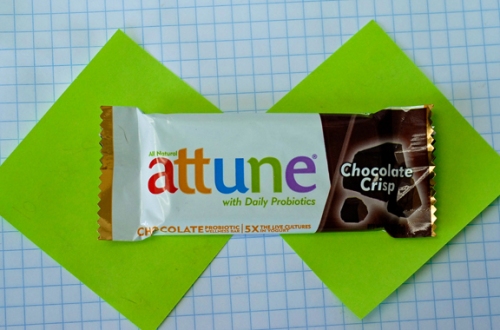 This thing is dangerously close to a Nestle Crunch bar.  DANGER I TELL YA!!! Good thing there are only two squares in each one (can someone say perfect portion?!)

I really enjoyed this bar!  I also had a Chocolate Mint version, but gave that to Nate when he had a moment of desperately needing something sweet.  I asked him to wait so I could take a picture, but alas it was an emergency and the bar didn’t stand a chance 🙂  HOWEVER, he did say that it was delicious and just the right amount of chocolate and mint flavor, and the texture was spot-on.  To be honest, I’m not sure if I feel any different since I started eating the Attune bars; however, knowing what I know about pre- and probiotics (check out their site for a great explanation!) I can imagine that eating them would DEFINITELY make you feel great!  Plus they taste incredible.  What more could you ask for?

Now, to explain the title of this post, it’s true:  I have baby fever.  I KNOW we don’t need a baby right now, and we’re not really in a place to comfortably accomodate having one.  I just have so many friends that are pregnant, just had a baby, or are itching for another one!  We aren’t 100% sure when we’re going to start, but I figure you should probably want one before you start trying, right?  It doesn’t help when I read amazing blogs like this, or seeing really cool slideshows like this though.  Sigh.  At least I’m not alone, right Tracey? 😉  Plus I have these two fur-babies to feed my motherly instincts!

I <3 them 🙂  And I love Nate for putting up with me when I cry about wanting to be a mom sometimes!

This morning I didn’t get a chance to do my workout, so tonight is going to be filled with yoga, weights, abs, and some 30-Day Shred action.  I can’t wait!  It feels like I’ve been cooped up for forever and I just want to stretch out and break a sweat.  Tonight’s the night my friends!  Also, I did notice a little more definition in my leg muscles…woohoo!  It’s always great to celebrate the little changes, right?

I don’t remember who I’m stealing this question from, but what are your favorite TV shows?  Anything new and Earth-shattering I should be watching? I’ve always been a sucker for The Office and 30 Rock, but I’m recording Modern Family tonight.  I also love anything (no really, anything) on Food Network.  I want to work for them 🙂

« Snowed In
Be Jealous »

For my @fasterwaytofatloss friends, here’s an AM

A little #howitstartedvshowitsgoing situation with

Why am I looking away? Simple: because it was the

🏃🏼‍♀️Who else is struggling with findi

So. It’s been a while since I posted on the feed