This title needs explaining; I know this 🙂

Yesterday was another Vegan Overnight Oat & Banana Soft Serve combo, this time with a little peanut butter and cocoa powder mixed into the soft serve:

Again, delicious!  Honestly, it’s still kind of weird eating cold oatmeal, but the soft serve MAKES it!  Plus it keeps me full for hours 🙂  Yesterday was “ride your bike to work day” in Boulder, but I didn’t since I was still not feeling 100% and we take our dogs to work.  For some reason I just didn’t want to ride my bike 15 miles in with 2 huge dogs (crazy, I know)!  Either way, there was a massive bowl of fruit for everyone at the office, so I made sure to snag a bunch of cherries for a snack:

I’m really picky about the fruit that I eat, but these were amazing.  I love cherries!  Reminds me of the time in college that I was in a horrible mood (only happened once, right Nate? :)) and Nate got me a bag of cherries at the store.  We ate THE.ENTIRE.BAG in one sitting, and I loved it!  Anyway, they were good 🙂  Lunch was some leftover Spelt Berry, Black Bean, and Edamame Salad, a cubed grilled chicken breast, and about 1/2 a cup of Pineapple Salsa: 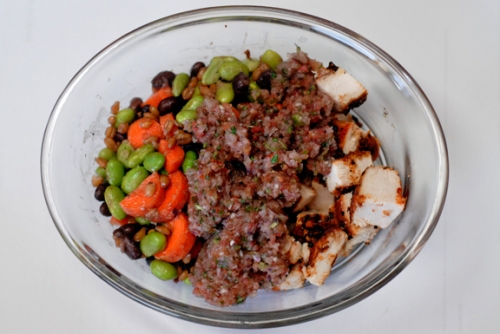 Heaven in a bowl! I love the chew of the spelt berries, and the salsa is seriously perfect:  sweet from the pineapple, but has just enough heat from the Rotel and the jalapenos.  Funny story about the spelt berries…I had HUGE plans to make Angela’s In a Jiffy Spelt Burgers, and, without reading the recipe, went to Whole Foods and bought 6 cups of spelt berries from the bulk bin.  That night I actually sat down to look at the recipe before dinner, and found out that she uses spelt flour, not berries, and I haven’t used them ever since.  So let that be a lesson to all of us:  make sure you read the recipe before buying the ingredients!

Another example is last night I was planning on using up 2 huge potatoes for Bell’ Alimento’s Gnocchi al Burro e Salvia (gnocchi with butter and sage sauce), but apparently missed the fact that it calls for fresh grated parmesan cheese.  What’s a food blogger to do when she is missing a key ingredient and has a hungry husband in the house?  Improvise!

OK.  I really just put myself out there for you guys…and I’m slightly embarrassed! I found those packets of “parmesan” in our cabinets and just hoped for the best!  While the potatoes were boiling for the gnocchi I cut them all open and put it in a tupperware container for later use.  Phew.  It’s out there, let’s move on shall we? 🙂  I decided to roast up some frozen broccoli:

And made a dijon-brown sugar glaze to bake some salmon in (I don’t recommend putting the parmesan on the salmon…yet another little kitchen mishap…):

And obviously the gnocchi.  OH THE GNOCCHI! I didn’t have fresh sage, so I used a small sprinkling of ground dried sage, and it was completely amazing!  I also browned my gnocchi a little bit (that’s just a preference of mine) in the butter, died, and went to heaven.  I also loved the feeling of boiling the potatoes, smashing them up, using my arm muscles to mix the flour and egg in, rolling it out, and cutting it.  It just felt so RUSTIC, you know?  If I had all the time in the world I would make my own pasta every single day, and love every second of it!  Because I’m really Italian now 🙂

Is it bad that I’m drooling still over this amazing dinner?

So there you have it:  despite the spelt berry mishap, the parmesan crisis, and the lack of fresh sage, I would call last night (and the night before) kitchen successes!  Plus I’m for-real-Italian…who could beat that?! 🙂

What’s the craziest thing you’ve used to sub in a recipe because you didn’t read the ingredient list carefully?

What food do you make that makes you feel AUTHENTICALLY part of that cuisine’s culture? I can’t really think of something that’s really CRAZY different than something on an ingredient list, mainly because I just decide to make something else if that’s the case…shows how adventurous I am, huh?  And I would say that rolling out pasta, kneading bread dough, and hand-stirring ingredients for both make me feel truly Italian, which I love.  Because, even though I might only be Italian by marriage, I FEEL Italian in my heart!