Hey guys!  My stomach is so so SO happy with me right now!  Which is definitely a far cry from what it was earlier today…let me explain.  It started off really well with the most incredible cappuccino brownies EVVAAAAAAAAHHHHH:

I had 2 and that’s when my stomach told me to cut.it.out with the sugar.  YIKES!  Lunchtime was some leftovers from last night:

Cheese tortellini with veggies & marinara (about 3/4 of a cup total): 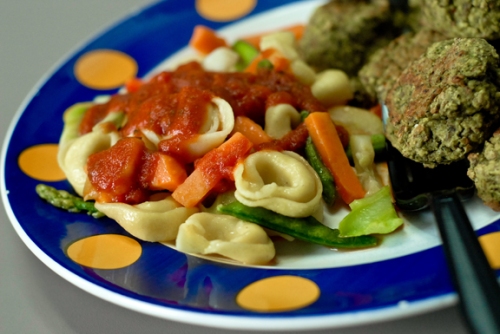 And 7 out of the 8 beanballs from last night: 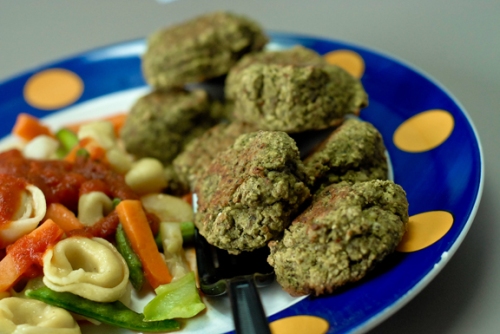 And that, my friends, is when my stomach told me it hates me and was no longer going to feel good.  Turns out there’s a bit of fiber in these too, and I hadn’t had near enough water today!  No bueno.  So I chugged some agua and did my walk (I was even able to go further than usual!), and by the time I got back I was good as new!  There was a little celebration for our marketing director who is leaving the company, so I had a little bubbly as well.  That’s right, at work.  Just one of the joys of working in Boulder!

After work we met Jason & Stephanie at The Med in Boulder for the FABULOUS happy hour for Steph’s birthday!  I love this restaurant and its fantastic Mediterranean food, plus during happy hour the most expensive tapas dish on the menu is $3!  You really can’t beat that.  Unfortunately I was so excited when we got there that I forgot my camera in the car, so all of the pictures are taken with the husband’s iPhone 🙁  C’est la vie, right?

The crust is SO.THIN and it’s really just the best!  Next we had some bruschetta:

This amazing assortment of olives (I’m not even going to pretend I know which is which, but they did have some cumin mixed in, which was really interesting!  Seriously delicious though!

Some fried polenta with basil and gorgonzola (ohmigosh…words don’t even describe how amazing this was!)

And the Muestro sampler with hummus, baba ghanouj, and tabouleh with flat bread and romaine:

Honestly, the hummus was not so awesome, but the baba ghanouj was incredible!  Just another awesome dish from The Med!  Then, of course, dessert had to be had!  We had tiramisu and ganache “cake”: 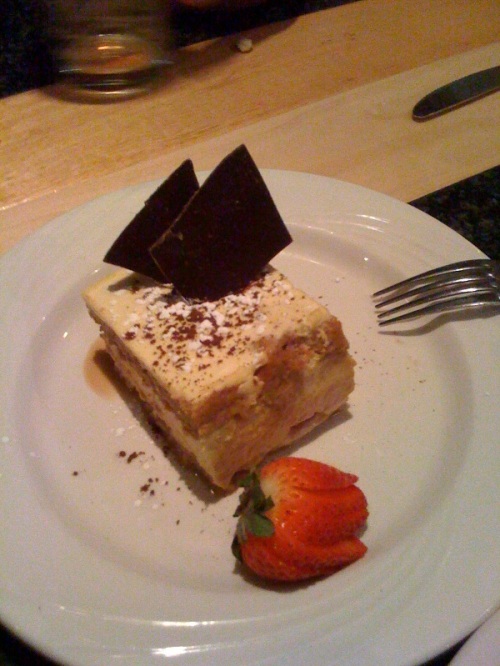 I mean, are you kidding me?!  This “cake” was basically a solid piece of ganache.  Yes, I’m serious.  It was heavenly!

The Med is such a fun place, and we had such a great time with our friends!  The rest of the night is going to be spent on the couch watching The Office (which, by the way, I am watching right now and it’s making me want to have a baby so I can see Nate be as cute about having a baby as Jim is).  Then I’m probably going to do some yoga before hitting the sack!  Perfect Thursday night 🙂

What’s your favorite kind of food to eat out?  Why?  Any favorite restaurants? I really love Mediterranean food, specifically Italian, so The Med is perfect for me!