Good morning!  How is y’alls weekend?  I know mine has been fantastic so far:  yesterday felt like an amazing Spring day!  It was in the upper 50s, sunny, and just overall beautiful outside 🙂

Nate and I slept in for the first time in a while, and then he took me on a Starbucks date 🙂  We got some coffee & split an apple fritter: 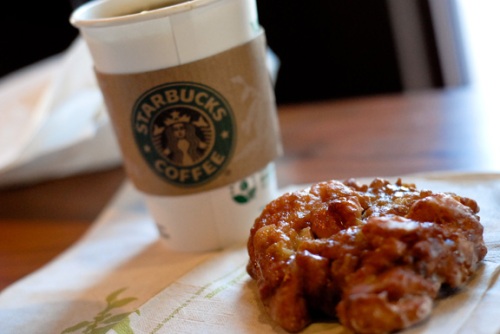 And I got the Huevos Rancheros wrap again: 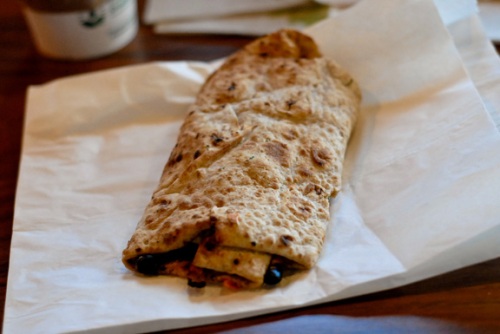 We had a great time!  That is, until a million hyperactive children ran in…actually, the worst part wasn’t the kids because let’s face it, kids just have a ton of energy.  But the parents on the other hand were incredibly obnoxious!  They were yelling and shouting and making a scene at the kids in an otherwise very calm and serene atmosphere.  I was pretty upset about simply because in everything they do, parents are setting an example.  I wouldn’t be surprised if the kiddos grew up to be obnoxious, shouting, and otherwise angry people…but I digress.  We just left and came home to relax and work around the house!  When we got home Nate worked on building a coat rack for us to hang by the front door, and I de-pooped the backyard (gross, I know).  I’d say one of my least favorite parts about living in Colorado is the fact that you can’t immediately pick up the dog stuff when there’s snow on the ground.  I suppose you could, but I’m just not one to hike through the snow in the backyard after both of our dogs.  Anyway, it’s nice and clean now, so that made me excited!  PLUS you could see snippets of green grass poking through…Spring is on its way! 🙂

We ended up going to watch our pastor’s oldest son’s last basketball game of the season, and afterwards hit up Cold Stone with them for an end of season celebration.  Nate and I split the smallest size Oreo Overload with the Sinless Sweet Cream instead of the regular Sweet Cream…’twas glorious! 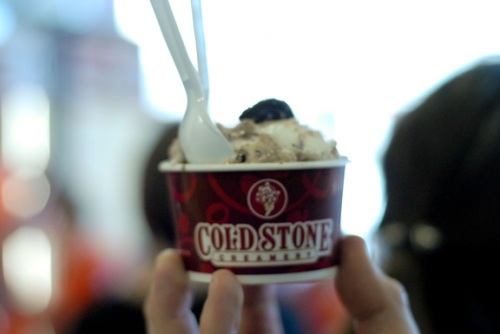 We had a great time with the Flemings, and then hit up Qdoba for lunch.  I got the grilled veggie burrito with rice, black beans, grilled squash and peppers, corn salsa, guacamole, light cheese, and lettuce: 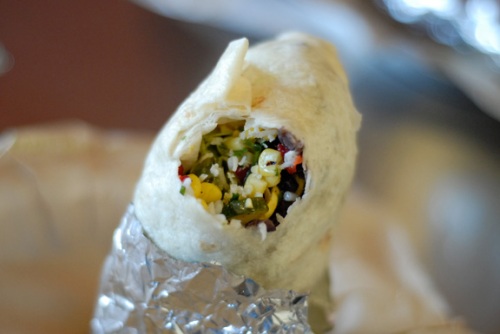 I really don’t know if I can truly say how much I love LOVE big burrito places!  Which is weird because I had a job for about a year or so in college where I worked at a local burrito place and, being the poor college student I am was, ate a burrito at least once a day because they were free for me 🙂  There’s just something about a massive flour tortilla that brings joy to the heart!

We got home, and Nate headed out to do some bottling of the second beer he and our friends made, and I stayed at home to do some intensive house cleaning.  Turns out the TV had other plans because I ended up watching all of Pretty Woman while I folded one load of laundry.  OOPS 🙂  It was really good to just sit and relax though, and now I’m all charged up and ready to clean today!  When Nate was on his way home I started dinner:  pizza! (again)!  If you haven’t figured it out by now, pizza is one of our favorite foods.  I got started cubing some chicken for Nate’s and roasting some pre-cut broccoli, carrots, and snowpeas with a little onion: 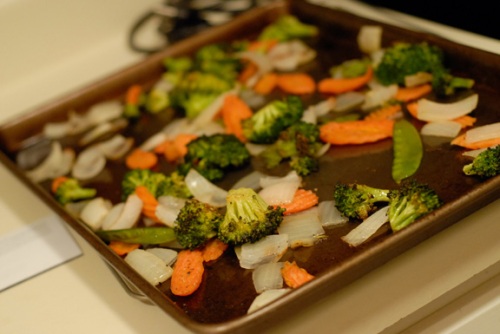 For the dough I used a box of Jiffy’s Pizza Dough mix that we’ve had in our pantry for a while.  No, it wasn’t whole wheat or anything, but it was still good!  Plus it made only the right amount of dough for us to both have a thin crust personal pizza: 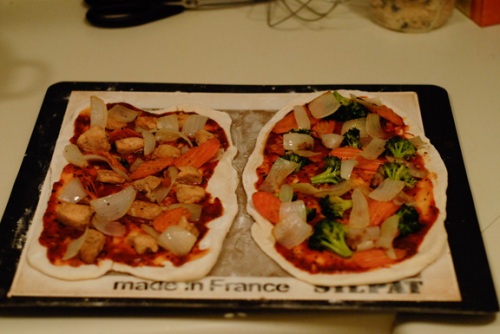 Nate’s had chicken, carrots, and onion, and mine had all the veggies on it.  So good! 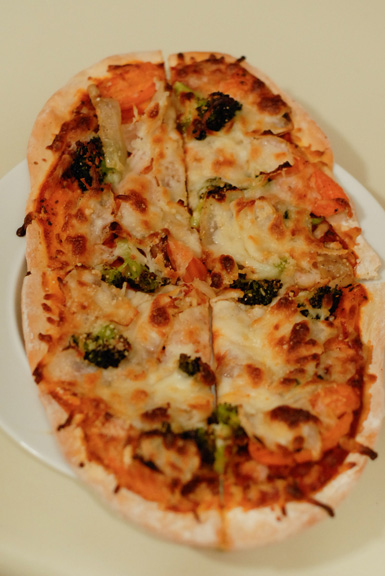 Finally, because Nate worked so hard and I was cleaning out the freezer, I made a small batch of chocolate chip cookies so we could enjoy a few while watching Couples’ Retreat on the couch.  Yesterday was definitely a great day! 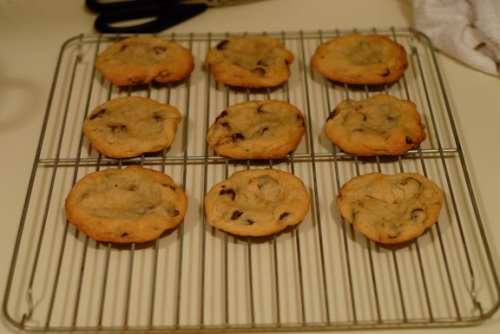 Breakfast this morning was another Green(ish) Monster like I had on Friday morning with 1/4 cup of oats instead of 1/3 cup:

So, just to go into this a little bit, I really enjoyed Dear John the other night!  It definitely wasn’t your conventional chick flick love story, but I thought it was an even greater love story than that!  I mean, it takes the greatest amount of love of all to forgive someone for hurting you.  I, like everyone else I’m sure, wanted to see them get married in the end, but I thought that with the rest of the story (in the movie, not the book) the ending was very appropriate.  Anyway, I just wanted to throw my little opinion into the pot 🙂

What kind of movies do you like?  What’s your favorite one of all time?  What about a recent favorite (circa January 2009 til now)? I am always a sucker for a good chick flick (obvi), but I actually really REALLY enjoy fantasy/fairytale/action movies as well.  Lord of the Rings (all 3!) is probably my favorite movie of all time, and recently…maybe The Blind Side?  It’s hard to remember all of the films I’ve seen in the past year or so, but I really enjoyed that one!

🍕 Need a quick low-carb dinner that you can cus

What's your challenge these days? Swipe right if y

A little throwback to one of my favorite recipes I

True story: when I made this recipe, I exhibited z

48 hours in #bentonvillear did not disappoint, and

The words I shared for his memorial service, for F

🍗A little meal inspo for you! This was THE easi