I tried chia oats this morning! 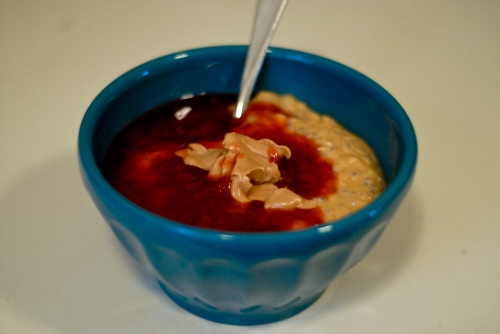 In the mix:  1/3 cup each of oats/water/milk, 1 Tbsp chia seeds, 1 packet Truvia, 1/3 cup pumpkin (stirred in at the end), 1 tsp vanilla, 1 Tbsp peanut butter, and 1 Tbsp strawberry jam (which kinda melted while I was taking the pictures…).  This was fantastic!  I don’t know if you’re supposed to be able to TASTE the chia seeds, but the texture was great.  I like peanut butter in my oats too…makes them super creamy and rich!

Ken & Leeann dropped Jasper (Jaspy) off today, and he and Keira have been playing non-stop since he’s been here!  They’ve already gone through 3 bowls of water!  Bunker doesn’t know what to make of it, so he’s sticking close to me (protection I suppose) and playing with his duck.  I managed to get them to hold still by pretending I had a treat: 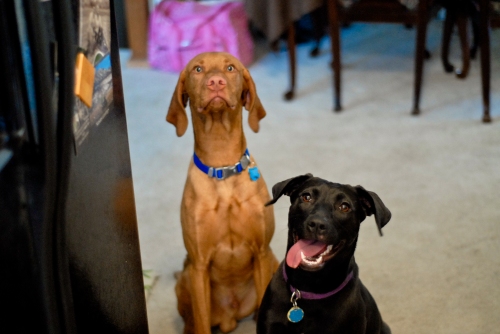 Cute couple, no?  They’re only a month apart and both weigh about the same, and they will play for hours on end (really, they will) without resting.  I bet I have some sleepy pups on my hands a little later!  And here’s a shot of my baby boy: 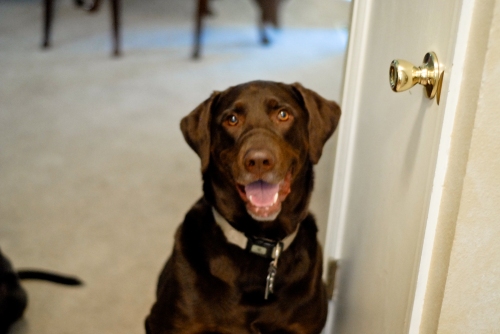 We adopted Bunker when he was 8 weeks old, and he’s been a mama’s boy ever since!  I can’t hide it though:  I love that he loves me so much 🙂  I mean, you’d think I’d been gone for years with how excited he gets when I wake up in the morning!  And when we get home from being gone for a few hours?  Forget it…it takes at least 20 minutes to calm him down.  Again, I love this and it makes me happy to know that I’ve been a good mom to him 🙂

Tonight is the Colorado Blogger Meet-Up at Ashley’s!  I’m so excited to meet everyone and taste all of their delicious goodies 🙂  Til then I’ll be painting our guest bathroom, so hopefully I’ll have some before + after photos (probably not as cool as Angela’s) a little later today!

Are you a dog person or a cat person?  Why? I had a bad cat experience when I was younger (read: old cat, young and curious Heather…you do the math), so I’ve always been more of a dog person.  I just love the amount of LOVE that is shown from dogs!  They just wear their hearts on their sleeves; they trust and love unconditionally.  I think the world could use more people that do that!

This error message is only visible to WordPress admins

Make sure this account has posts available on instagram.com.