Michelle talks about her beautiful journey today on Faces of Beauty!

Please hop over and vote for me to be the Foodbuzz Next Food Blog Star!  Just takes a second 🙂

This past Saturday Nate and I served with our friends at church at an event called Broomfield Days.  We had a booth that was supposed to specialize in popcorn and sno cones, but when we found out the high for the day was 60 degrees (a fluke in the middle of a very hot week) we went with the coffee-cocoa thing instead.

But I’m not here to talk about that.

And even though I could, I’m not here to talk about the whole roasting pig right behind our booth,

Nor the ears of corn that it took a cheerleading squad a full hour to do (that’s not a bad thing – it was a LOT of corn!).

Today I’m not here to talk about the hilarious shirt that we saw in line, 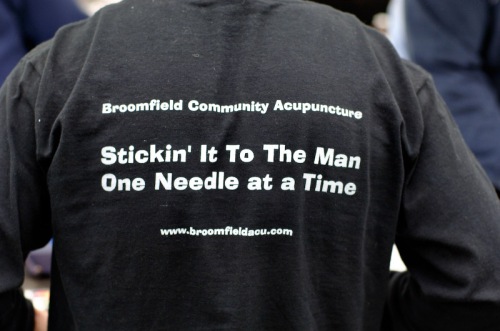 and even though I could go on for days and days about my new-found love of funnel cakes, that’s not what I’m here to talk about either. 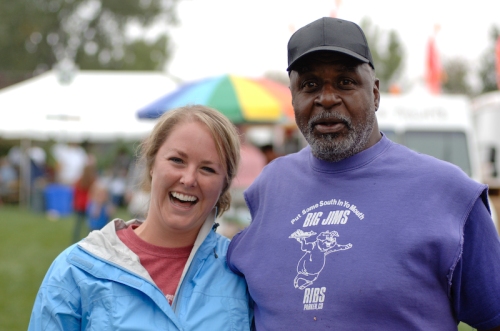 Big Jim is a native of Arkansas, just like Nate, and has been doing the BBQ thing in the Denver Metro for the past 5 years.  And y’all?  This man’s got some SOUL!  The line for his booth was the longest one at Broomfield Days, but one sniff in the air and we couldn’t say no.  Thankfully Big Jim provided the entertainment too!  He would grab a slab of meat from the smoker, walk over to us, and ask if we like our pork tender.

Well of course, Big Jim – tender’s the only way to go!

He would break the pork shoulder open with his bare hands and simultaneously say, “I know it’s good, I eat it every day!”

Other one-liners we loved were, “The big dog’s in town!  We done run everyone else out!” –  a truer statement I’ve never heard.  But I would have to say that my favorite line of the day was, “Talk to me!”  Said after every trip back and forth with a different cut of meat, my stomach sure was talking then! 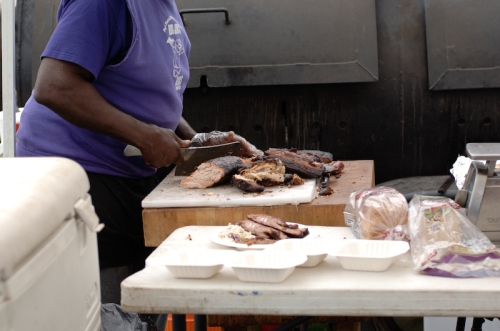 He uses hickory smoke to flavor the incredible food he’s got going in the 3-door smoker that he travels with.  He has a meat cleaver that was handmade for him in Cheyenne, Wyoming.  He likes to talk, he likes to meet people, and he is PROUD of his barbecue!

Not that he shouldn’t be though – paired with a sauce with hints of cinnamon, a slice of bread, and the best potato salad (next to Mom’s) that I’ve ever had, Big Jim knows what’s up.  What else could you expect from a man with a huge cleaver (Nate was jealous) and the slogan, “Put some South in yo’ mouth”?  All I’m sayin’ is he had me at that.

And put some South in our mouths we did, wishing we’d ordered more as we stared listlessly at the mile-long line.  We didn’t stick around much after that, only a few minutes to talk about the cleaver situation and how Nate could somehow get himself one just like Jim’s, but the experience is one we’ll always remember and look forward to for years to come!

Talk to me, Big Jim…talk to me!

My allergies may be making me want to scratch my e