Hey guys! Be sure to check out my guest post at Then Heather Said in her “More Than” series!!!

So Keira and I are back home and going outside every 20 minutes or so 🙁  It totally kills me to see her not feeling great (she’s been really pouty and sleepy all day) and I can only imagine what it’s going to be like when we have sick kiddos!  I’ll spare the intimate details, but she’s got a bladder infection.  Good news is the vet thinks that’s all it is, so we have 7 days worth of antibiotics that will hopefully cure everything!

Last night for dinner we had black bean burgers and sweet potato fries!  I know I said we’d also have kale chips, but there just wasn’t enough time.  I’ll explain that later…but I knew upon getting home what kind of cheese I wanted on my burger! 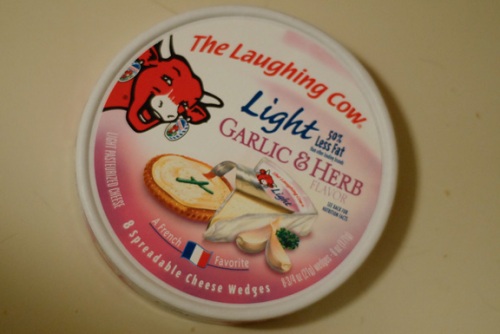 I seriously love this stuff…it’s so easy to spread, super flavorful, and the portions are the perfect size.  What’s not to love?  Nate actually did most of the cooking since I was doing the 30-Day Shred and yoga per my HPJ page 🙂  He’s such a sweetheart!  We made black bean burgers a la Christie, and they were fabulous!  Here they are cooking away: 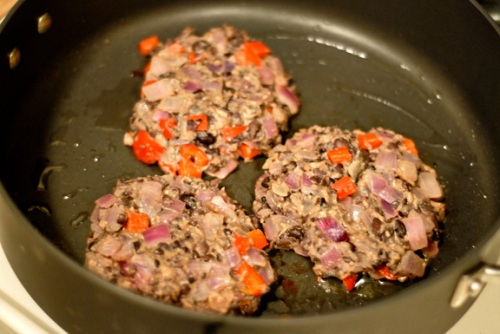 And my plate before it was annihilated:

We had some frozen sweet potato fries with a little salt and a lot of pepper, just how we like it!  ‘Twas a delicious dinner!  Nate even said he liked the burgers, which is saying a lot since he doesn’t usually like to have a dinner without meat.

Now, the reason we were short on time was because we went and saw Valentine’s Day!!!

Honestly, I didn’t think this was as good as it was cracked up to be.  It took a while for the movie to really start up, and it just felt like everyone was so fake (except of course for Julia Roberts; she was fabulous as always).  Towards the middle it really started to pick up and at the end I really enjoyed it.  Nate and I shared a popcorn (awwwwwwww) and just enjoyed our little date!

This morning we woke up and I started doing my yoga since I got up early enough to do it.  Keira kept whining, so I let her out and finished up.  When I went upstairs I noticed that she’d peed on the floor!  Then we kept noticing all of these places where she’d peed (she’s been housebroken for at least 6 months) and some other things – trying to keep it clean here – so I ended up taking her to the vet TWICE to get checked out.  She’s fine now, but is going to be resting the rest of the day while I get caught up on work stuff from home. 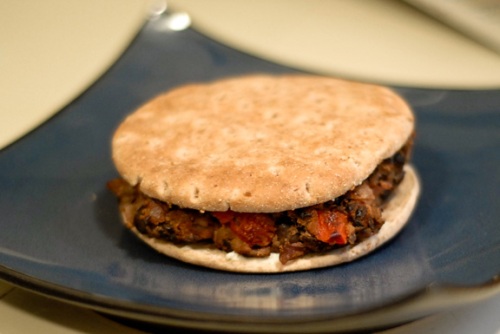 And mid-morning when I brought Keira home so I could get her to pee in a cup I made some kale chips for a snack:

These were so good!  I didn’t really know what to expect, but they sure did surpass whatever expectations I had!  They seriously just melt.in.your.mouth and have a nice healthy flavor to them 🙂  I don’t think Nate would like them, but I’ll definitely be making them in the future!

I just got back not too long ago from our second visit to the vet, and Keira’s asleep on the floor beside me.    I am having to take her out every 20 minutes or so, which is no bueno.  I just feel bad for the girl!  Tonight I’m going to make tortellini with TONS of veggies for dinner (another Eating Well recipe!) and then I’m going to sit up in the office and do tax stuff with Nate while simultaneously organizing all of our files and folders and papers.  That’s right people…I got skillzzzzz. 🙂  Oh, and for lunch I ate the rest of the sweet potato fries (about a handful) and a Lean Cuisine pizza and forgot to take a picture.  Oh well…I feel like a slacker, but everyone once in while I do actually eat things that I don’t document!  So it goes…

If you could pick any actor/actress to play you in a movie, who would you pick?  Why? I know I would pick either Julia Roberts or Sandra Bullock…it’s gotta be someone from the South since that’s where I feel like I’m from 🙂