Isn’t it great how a little of this: 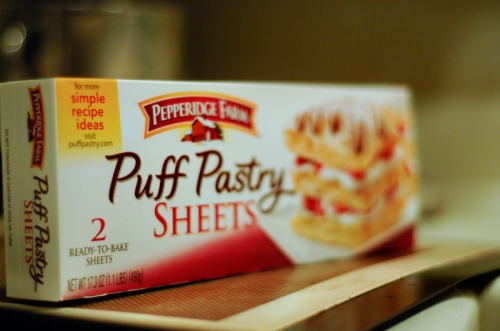 And a little of that: 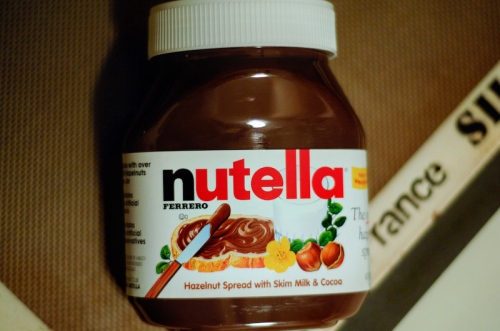 Can make something so wonderful?  I’d be willing to bet that, short of butter, Nutella anything would be heavenly.  And if you disagree, well, I just ate one.  That’s enough proof for me 🙂 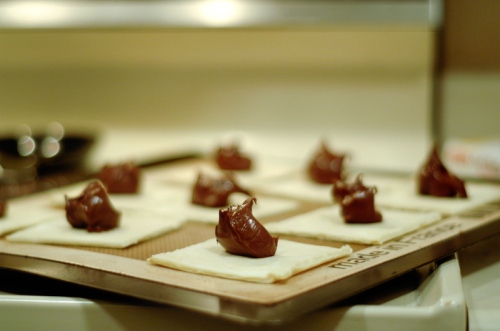 One of the best parts of the whole thing is that there are 2 ingredients, both store-bought, and you come out of the kitchen with something that looks like it took a lot of time and effort. 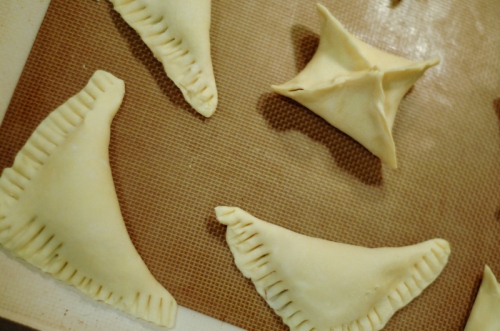 Puff pastry, flaky and ooey and gooey and oh-so-magical, gets me every time.  Load that junk up with butter or brie and I’m a happy, happy camper.  The only real “work” with the pastry is letting it thaw and then cutting it with a pizza cutter.  Done and done. 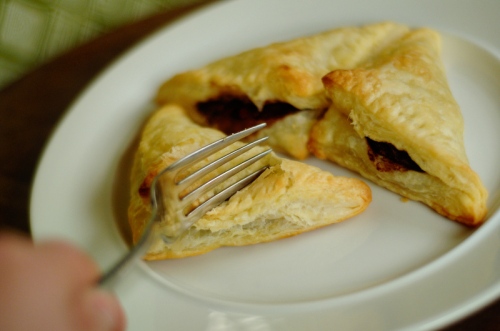 But add Nutella?  Suddenly the world become a kaleidoscope of flavor, whirling round and round, until you wake up in a sugar coma with Nutella-stuffed popover crumbs all over your face.

Not that I know this personally…I just know someone it happened to…uh…hmmm.

Preheat oven to 375.  Let the puff pastry thaw according to directions on the package.  When it’s thawed and pliable, cut the puff pastry into 9 square using a pizza cutter or a knife.  Lay flat on a baking sheet covered with parchment or a Silpat.  Put a dollop of Nutella in the middle of each square.  And by dollop I mean anywhere from 1/2 to 1 Tbsp on each one…you want to leave enough room to close it!  Fold the pastry over so that it forms a triangle around the Nutella.  VERY DILIGENTLY seal the edges shut by pressing the tines of a fork all around.  Puff pastry expands so much that you have to be careful all the Nutella doesn’t spill out in the oven.  Bake at 375 for about 15 minutes, or until golden brown and flaky.  EAT.

P.S. Don’t you just love how I’ve shown a fork in pretty much every photo?  The sad reality is that once the photo shoot was done I was just grabbing them by the handful and taking big bites.  Hey, that’s what breakfast is for!

« Scenes from a Bar
Dirty Kitchen »